Today, as the fear of a second wave engulfs us, it seems we have learnt nothing from how the world wasted February 2020, allowed COVID-19 to spread. Prime Minister Narendra Modi warned yesterday that if we did not act fast, this time rural India could be severely hit and if that were to happen our medical system would collapse.

Sadly, the PM’s message does not seem to ring any bells in the bureaucracy. While he spoke of the fear of being engulfed, the Ministry of Health continued its banal chant of “we are the world’s second fastest” vaccinator, conveniently forgetting we also have the world’s second largest population and nobody knows the pace of vaccination in China, (64 million vaccinations?) which has contained Covid better than most countries. There is little point is comparing ourselves with the UK or US, they have smaller populations and have already administered at least one dose to 40 per cent and 33 per cent of their population respectively. So while our 36 million jabs may be a big deal, it’s only 2.6 per cent of the population. 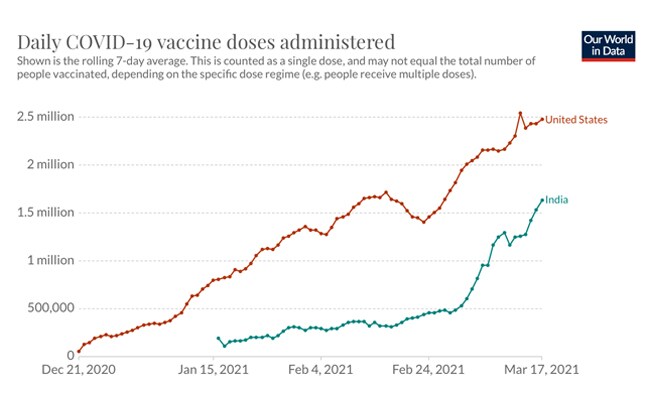 The fact is that at the pace that we are vaccinating – 1.5 million daily – it will take us, according to Bloomberg, three and a half years to vaccinate 75 per cent of the population and reach herd immunity. The US is targeting September 2021. If we target only those over 18 years, it will be close to two years. 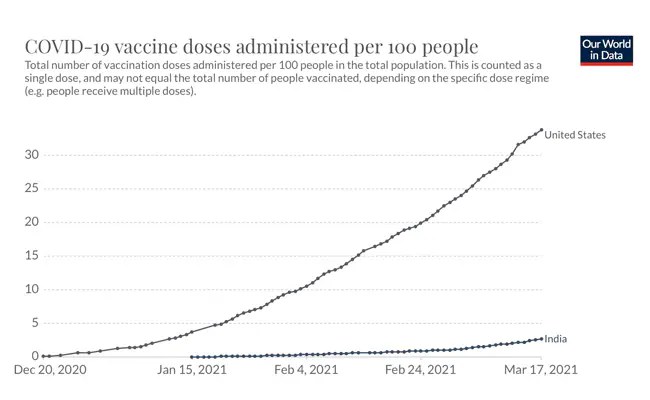 The fact is we cannot wait that long. The second wave in Maharasthra, other states and a third wave in Delhi, Haryana and the like would have consequences that are too severe to imagine. The Indian medical system would be stretched to the limit and shutdowns and curfews would devastate an economy that is just about emerging from its worst year in decades. Any more closures, restrictions and slowdown in consumer spending would break the back of most MSMEs and lead to mass unemployment.

Unless we realise that we are in an emergency situation, we will not be able to reach herd immunity this year. If we assume that the population under 18/19 doesn’t need to be vaccinated for the moment, to reach 75 per cent of the balance population we need to vaccinate about 550 million people, with two doses for the most part. That means we need 1.1 billion shots (less if we get the single shot Johnsons and Johnson vaccine). How do we do that?

Industrialists have been begging the government to speed up and involve them and the private sector in boosting vaccinations. Naushad Forbes has coherently argued for boosting vaccinations to at least 3.5 million a day given the current production level and then double that after June when production picks up. This would potentially take it to 1.1 billion shots by Diwali. He also joins Anand Mahindra in suggesting targeting high surge areas like Maharashtra and other states with any surplus stock.

What is completely unclear is what is happening with the supply. According to a court submission, the government has given states 76 million shots, of which only 36 million have been used so far – that’s less than 50 per cent. Why are the states taking so long to vaccinate? And why are some states allowing upto 10 per cent of the vaccine shots to expire? Why are we stuck on some plan worked out last year to vaccinate all 300 million senior citizens and those above 45 years with co-morbidities by August? What is the logic behind that? That’s 5.5 months away? Given that India can produce close to 100 million vaccines a month now, why are we continuing with this slow rollout?

Isn’t it time that the rules for vaccination are changed? Why should private hospitals only vaccinate 200 people a day? Large hospitals could easily manage four times that number quite safely.

How else the government can speed up the vaccination process:

2. Open up the age group to everyone above 45 now and then above 30 when production hits 200 million vaccines a month.

3. Allow private sector to purchase the vaccine at market rates and vaccinate its staff.

4. Extend the period for the second shot from 4-6 weeks to 8-12 weeks which WHO considers to be that a safe timeline. This would boost the number of people with at least one shot.

5. With many states having allowed stock to expire, we should have open days for all when vaccines that are expiring in the following week are available to anyone. A number of states and private organizations in the US are doing this to avoid waste.

6. The armed forces have a huge medical corp. Like the US use them and other trained army personnel to help with the vaccination drive, every cantonment can act as a nodal point. Also, given the credibility of the forces, more people may take the vaccine.

7. Should we be open to geographic and occupation-targeting for vaccination?

The last point raises many ethical and political questions. Ethical issues from job-related criteria are always there; is someone like a lawyer (since this issue is on in court) more likely to catch Covid and so should be vaccinated first? Why not scooter or taxi drivers, or air hostesses and airport staff? In the US many states have included supermarket workers in their key list for vaccination. In India, with more than 60 million retail outlets, this would open a Pandora’s box.

And on geography, do you choose areas of high cases, or urban areas which are more prone? Does this work against states that have managed to control the virus better? The easy answer may be to target high case areas, but then it would need a big concentrated vaccination of say Pune, over short period. But will that stop the virus from escaping into the neighbouring towns?

The fact is that people have dropped their guard. People a weary of lockdown, of social distancing, wearing masks, and have started to mix much more frequently without any protection. Testing, tracing and general government follow-up has also fallen. It’s time to play hard ball again. Unfortunately, unless we resort to fines and ‘no fly lists’, people will continue to ignore many of the rules; railways should also implement this.

Finally, unless we treat this current resurgence as a national emergency and pull out every stop to get the virus under control, we will lose the battle. New mutations are happening and already, the government is reporting an increase in the UK, South African and Brazilian mutations. If these spread faster than we can vaccinate, then even the vaccinated will be at risk. We are a few days away from the anniversary of the start of the lockdown. Let’s hope we don’t have a repeat this summer.

Disclaimer: The opinions expressed within this article are the personal opinions of the author. The facts and opinions appearing in the article do not reflect the views of NDTV and NDTV does not assume any responsibility or liability for the same.

DC vs PBKS IPL 2021 Live Score: Mayank Agarwal Gets Punjab Kings Off To A Flier vs Delhi Capitals

Maharashtra Reports Over 67,100 Covid Cases In Biggest Ever One-Day Surge

Rail Passengers Can Be Fined Up To Rs 500 For Not Wearing Masks, Spitting

PM Modi says he has appealed for Kumbh Mela to now be “only symbolic” due to Covid crisis, adding that it “will strengthen fight”

Rules For Re-Issue Of Overseas Citizen of India Cards Simplified

Delhi Malls, Gyms, Spas To Be Closed, Cinema Halls To Run With 30% Capacity

No One Does Red Carpet Like Priyanka Chopra And Nick Jonas. Twice As Fab

Ahead Of Navratri And Ramzan, Uttar Pradesh Restricts Gatherings At Religious Places Amid COVID-19 Surge

3 Dead In Fire At Covid Hospital In Nagpur: Report

Soldier Taken Hostage By Maoists After Ambush In Chhattisgarh Released

Why Is Delhi Vaccination Below National Average? Minister’s Answer

Rang De India, A Campaign By Rang De and NDTV

Maharashtra Board exams HSC SSC Class 9, Class 11 students to be promoted without exams. Deets inside

India Records Over 1.07 Lakh New COVID-19 Cases In A Day For First Time

DC vs PBKS IPL 2021 Live Score: Mayank Agarwal Gets Punjab Kings Off To A Flier vs Delhi Capitals

Maharashtra Reports Over 67,100 Covid Cases In Biggest Ever One-Day Surge

Rail Passengers Can Be Fined Up To Rs 500 For Not Wearing Masks, Spitting

PM Modi says he has appealed for Kumbh Mela to now be “only symbolic” due to Covid crisis, adding that it “will strengthen fight”

Rules For Re-Issue Of Overseas Citizen of India Cards Simplified

Delhi Malls, Gyms, Spas To Be Closed, Cinema Halls To Run With 30% Capacity

No One Does Red Carpet Like Priyanka Chopra And Nick Jonas. Twice As Fab

Ahead Of Navratri And Ramzan, Uttar Pradesh Restricts Gatherings At Religious Places Amid COVID-19 Surge

3 Dead In Fire At Covid Hospital In Nagpur: Report

Soldier Taken Hostage By Maoists After Ambush In Chhattisgarh Released

Why Is Delhi Vaccination Below National Average? Minister’s Answer

Rang De India, A Campaign By Rang De and NDTV

Maharashtra Board exams HSC SSC Class 9, Class 11 students to be promoted without exams. Deets inside

India Records Over 1.07 Lakh New COVID-19 Cases In A Day For First Time

Armie Hammer is under investigation for sexual assault

“This Marriage Is Not A Result Of Pregnancy”

IPL 2021 will go on as per schedule, says BCCI president Sourav Ganguly

Mumbai reports over 11,000 coronavirus cases in a day for the first time

Uttarakhand announces Covid vaccination for journalists of all ages

US Capitol On Lockdown After Vehicle Rams 2 Officials, 1 Dead

PM Hits Back At Mamata Banerjee

Kirron Kher Being Treated For Cancer, “Well On Way To Recovery”

Coronavirus Vaccination: India Vaccine Net Widens Today To All Those Who Are 45 Or Older: 10 Facts

Interest Rates On Small Savings Cut, Saving Deposit Down From 4% To 3.5%

DCGI extends shelf life of Covishield from 6 to 9 months

Drones Banned In Puducherry Ahead Of PM Modi’s Visit Today

Teen Girls Charged With Murder, Carjacking Of Pakistan-Origin Driver Mohammad Anwar In US

Snake Venom Worth Over Rs 1 Crore Seized In Odisha, 6 Arrested

IND vs ENG, 3rd ODI: Strategic shift could be on cards for India in series decider against England – Preview

Assam’s Sarbananda Sonowal Votes, Says Prayed For Peace For All

May Take “Strict Action” By April 2

2 Dead After Fire Breaks Out At Mumbai COVID-19 Hospital

Covid Negative Report A Must For Entering Bengaluru From April 1

UP Cop Goes To Mediate Dispute Between Brothers, Shot Dead By One Of Them

This Matrix Has To Move Beyond Reservation: Supreme Court

Man Arrested After Police Respond To Active Shooter At Boulder Grocery Store In Colorado, US

Trump Plans To Return To Social Media With His Own Platform: Report

Arindam Bagchi to be new spokesperson of Ministry of External Affairs

Spot The Difference Between Parineeti Chopra As Saina And The Real Saina Nehwal. No? We Neither

All Teachers, Journalists, Bankers Cleared For Covid Vaccine In Ludhiana

Drugs Seized From Car Driven By Man Who Lost Job During Lockdown: Cops

Poll Panel Rules Out Attack On Mamata Banerjee, Says It Was Accident